The conversation
Has long been about females,
Teach your sons,
To value the girl-child.

For generations gone by,
Females have borne the burden,
Teach your sons,
A woman is not an “asset”.

Teach your sons,
They’re humans not animals,
Fit to control emotions,
And not slaves to their hormones.

Teach your sons,
Respect is due to all lives.

What can I say about the woman,
Who grows younger with age;
And when she smiles,
It looks like the sun shines out from her face.

The woman, who
Struts the earth, like it’s her stage,
And it’s dwellers, her audience.
Whose voice carries an arid detachment
When necessary,
Yet holds within it- a sanctity which says
Okay- you got this- I am here for you,
When necessary.

What can I say about the woman-
Who is part storm, part rainbow,
Part rebel, part angel;
Part Iron, Part Honey
A woman who is everything
I hope to be.

All I want to say,
I cannot say…
About the woman who grows younger
With every passing day.

Welcome to another writer’s quote/poem Wednesday, where I share some of my favourite poems written by other authors. I had initially planned on sharing a poem by C.K Williams, titled the Nail, as this week’s submission, but then decided against it today.

Why? Because, I personally have had enough of what’s going on in this world. We are not good to one another. I mean, just look at the ridiculousness carried out by “white supremacists”, in the United States. How did we even get here. From celebrating the first black president just a few years ago, to having to convince people that something as simple as the colour of one’s skin doesn’t make a person inferior.

This has got to stop. And so, I decided for this week, instead of bringing another poem depicting the sad world we live in, I wanted to take you guys along to South Africa, in this poem. Where one woman, against the backdrop of poverty, politics and economic difficulties, displays strength and courage. She plays her part in a society where even the leaders fail to play theirs.

Her Head by Joan Murray
Near Ekuvukeni,
in Natal, South Africa,
a woman carries water on her head.
After a year of drought,
when one child in three is at risk of death,
she returns from a distant well,
carrying water on her head.

The engineers have reversed the river:
those with power can keep their power,
but one woman is carrying water on her head.
In the homelands, where the dusty crowds
watch the empty roads for water trucks,
one woman trusts herself with treasure,
and carries water on her head.

The sun does not dissuade her,
not the dried earth that blows against her,
as she carries the water on her head.
In a huge and dirty pail,
with an idle handle,
resting on a narrow can,
this woman is carrying water on her head.

This woman, who girds her neck
with safety pins, this one
who carries water on her head,
trusts her own head to bring to her people
what they need now
between life and death:
She is carrying them water on her head.

“Girl! You’ve got some serious screws lose.”
“He was such a fine specimen.”
“You know you’re making a mistake right.”
“She sure is! What were you thinking, saying no to him.”

Layla stared blankly, hoping her evident disinterest in their monologues would get them to stop talking; it wasn’t working.

“Are you even listening to what we’re saying”,
“We’re trying to help you out here, you know”.

Layla gave a loud sigh, then turned to face them,
“Why“, she said.
They stared at her, lack of understanding, evident on their faces.
“Did it occur to you, to ask me why I said no to him?”
Silence filled the room. She got up and smiled wearily,
“That’s what I thought.”

Layla pointed through the window at the narrow steep pathway, guarded by green shrubs on all sides, which led to up to the hill.

“That’s where I’ll be when you’re all done,” she added before heading out. Their murmurs of “you’re not getting any younger you know,” following her out the door.

Word count: 171 words.  This story is in response to Flash Fiction For Aspiring Writer’s photo prompt challenge, hosted by Priceless Joy, where each week we are provided a picture and are to write a 75-175 word story inspired by it.  Thank you very much for this week’s photo @JS Brand.

I have to confess. I look forward to Wednesdays on this blog, where I get to share some of my favourite poems written by other authors with you guys. Today’s poem is titled “in the park” by Gwen Harwood. It’s a powerful pessimistic poem about a woman who has sacrificed so much for her children, she has given up her life so that they can have theirs. And rather than the emotion of joy and pride in her children, the character in the poem, feels and weary and resentment which is manifested in the line where she says- “they have eaten me alive”.

In Nigeria, especially the northern part, many women stay in marriages which are sometimes volatile and abusive simply for the sake of their kids. They view they’d rather take on the torment than leave their kids in the hands of the abusive partner or raise their kids in a broken home. According to an analysis by U.K. Essays, “the dominant reading of the poem is that, for certain women, motherhood can be a burden. Sometimes when a woman’s life predominantly revolves around looking after her children, her sense of worth is devalued.” I’ld like to add, the above quote is not my opinion, but solely an analysis of the poem.

In The park by Gwen Harwood

She sits in the park. Her clothes are out of date.
Two children whine and bicker, tug her skirt.
A third draws aimless patterns in the dirt
Someone she loved once passed by – too late

to feign indifference to that casual nod.
“How nice” et cetera. “Time holds great surprises.”
From his neat head unquestionably rises
a small balloon…”but for the grace of God…”

They stand a while in flickering light, rehearsing
the children’s names and birthdays. “It’s so sweet
to hear their chatter, watch them grow and thrive, ”
she says to his departing smile. Then, nursing
the youngest child, sits staring at her feet.
To the wind she says, “They have eaten me alive.” 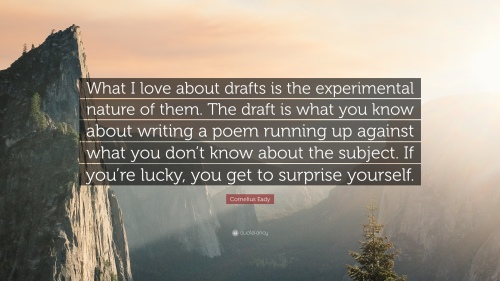 One of the things I enjoy doing during my free time is watching poetry recited out loud on YouTube. I don’t mean spoken word poetry, I mean those classical poems by Maya angelou, Emily Dickinson, Langston Hughes e.t.c. Watching them being recited adds more meaning to the poems, and increase in my understanding and love for the poems and poetry as a whole. It’s during one such occasion, I first heard the poem- I’m a fool to love you by Cornelius Eady. That poem touched me deeply; it spoke to me in ways many poems don’t and that’s why today I decided to share it with you guys for Writers Quote/Poem Wednesday.

I know I am not done with my AtoZ challenge and it’s already May, will try to roundup soon, the letter X is really not inspiring. Below is the poem

I’m a fool to love you- Cornelius Eady

Some folks will tell you the blues is a woman,
Some type of supernatural creature.
My mother would tell you, if she could,
About her life with my father,
A strange and sometimes cruel gentleman.
She would tell you about the choices
A young black woman faces.
Is falling in love with some man
A deal with the devil
In blue terms, the tongue we use
When we don’t want nuance
To get in the way,
When we need to talk straight.

And is the blues the moment you realize
You exist in a stacked deck,
You look in a mirror at your young face,
The face my sister carries,
And you know it’s the only leverage
You’ve got.
Does this create a hurt that whispers
How you going to do?
Is the blues the moment
You shrug your shoulders
And agree, a girl without money
Is nothing, dust
To be pushed around by any old breeze.
Compared to this,
My father seems, briefly,
To be a fire escape.
This is the way the blues works
Its sorry wonders,
Makes trouble look like
A feather bed,
Makes the wrong man’s kisses
A healing.

They say-it’s a girl,
And a chicken is slaughtered,
When a boy graces the earth,
A cow- he deserves.

They say- it’s a girl,
With one glance and their backs;
A boy breathes first air,
And is enshrouded by a crowd.

They say- it’s a girl,
and their shoulders feel burdened,
Cost of marriage is high-
Faces clouded with grief.

They say- it’s a girl!
In the 21st century,
The women curse their stars,
For birthing their kind.

They say- it’s a girl,
And ignorance comes to fore.
But without girls in the world,
There will be no men.

My sister in Somalia-
The pride of the eastern African
Continent, the shoulder which held
Together- family, friends, a nation in
Herself- bearing one after the other
Little ones, in succession.
My sister lay today,
Skin on bones.

My sister in Somalia-
The fighter who’d give her all
For the future generation, a wife
sharing the burdens of her
Partner, with ease. My sister lay today-
Her young ones, at her feet-
tired eyes moving across all three;
And the dreaded- who to feed?
only one morsel to eat,
I weep for my sister in Somalia. 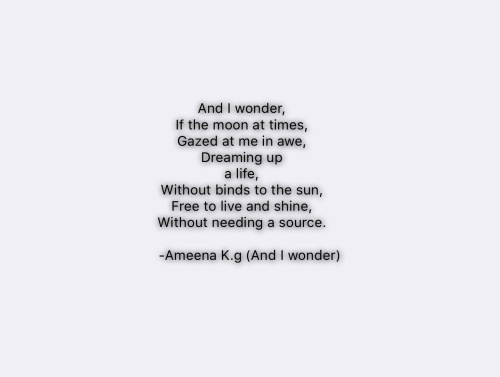 And I wonder,
If the seas,
Ever wish,
They could be me,
Free to wander,
Farther than the shore,
Unattached to the moon,
And it’s pull at dusk,

And I wonder,
If the moon at times,
Gazed at me in awe,
Dreaming up
a life
Without binds to the sun,
Free to live and shine,
Without needing a source.

And I wonder,
If the women across,
Sullen eyed,
With faces white,
Ever wonder,
What life would be like
Without a child to cater for,
Free to live and travel,
At the whim of desire. 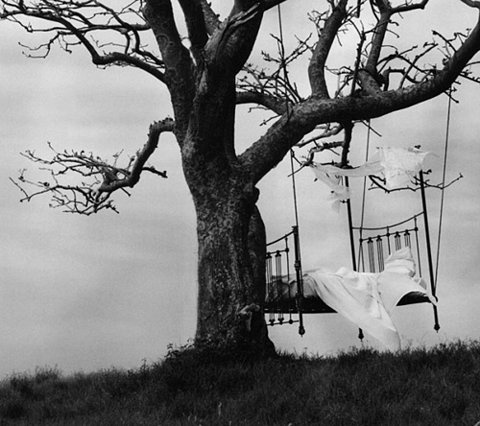 Some women hold stories,
Close to their bosom;
Stories so grave,
they believe,
It could cause a ripple effect,
And upturn the balance of life,
If repeated.
My mother- was one such.

She’d sigh at length and go off,
Staring,
Into space…
Oblivious to three munchkins,
laying on the ground,
Competing,
Who’s got,
The healthiest lung.

She’d go off sometimes,
At the sight-
Of a man in a red shirt,
Or a yell across the street,
Or something so little as,
An innocent question put forward,
By a kid.
My father would say-
Just let her be.

And so I grew older-
Mastered in the art of
Threading lightly;
Till my curiosity,
got the better of me;
And I questioned-
Why does she do that?

That summer morning,
I learnt of the horrors,
Of a young black girl,
Growing up with little to nothing,
At the edge of the sea;
Where being a dark skin,
had a price and being a female-
A burden.
And I knew why, she held those stories
Close to her bosom.

the above picture is courtesy of Legend.az