I believe in coffee
And the effect of
witnessing the majestic
Welcome of the sun.

I believe in storms
And the rush to take cover
From Nature’s anger
Or blessing,
Depending on who you ask.

I believe that the past
Harbours many mistakes
But few regrets.

I believe that to love
Is to accept wholeheartedly
The good, the yucky,
The perfections, the flaws.

I believe that trust
should be freely given,
Suspicion earned,
And once broken,
Trust’s frayed edges can
Rarely be mended.

I believe in prayers,
And a God far superior
Than anything, anyone.

I believe in freedom,
Free will, free choice.

I believe
When the blinds are pulled,
The spotlight off,
I need to be able to look
In the mirror,
And vouch for the choices
I make everyday…
I hope I can. 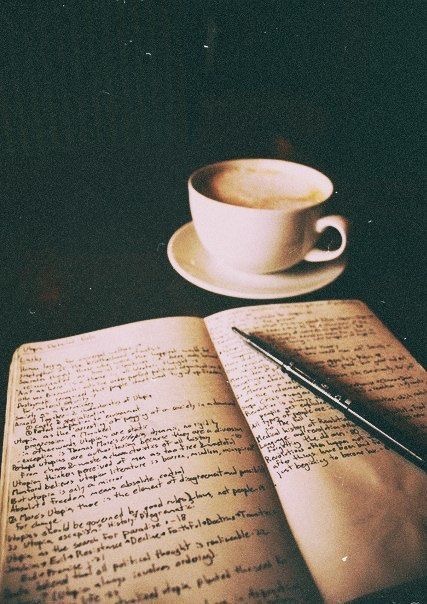 She wants to read about
romance, in an atmosphere
of scented roses. How to get the one
your eyes are set at; the heart’s
flutterings at the sound of a voice;
The thought of a face.

I want to write of sadness
and grief; the atmosphere of
grey clouds on a summer day. How
the mind works from the fateful day,
when the fruit of one’s womb,
Departs from earth. 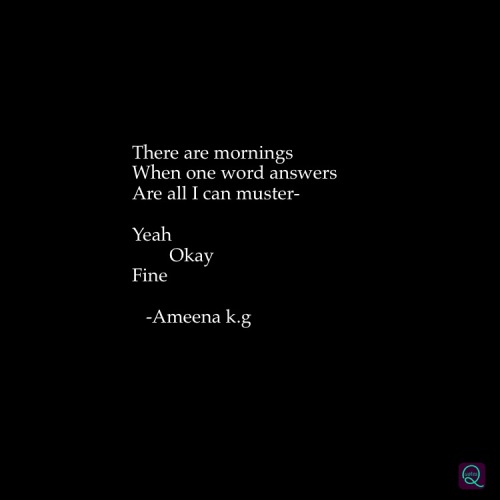 There are mornings
When my spirit is filled
With the songs of the
Mockingbirds… singing
Alive… in tune…
and i I am up for laughter,
Banter,
But,
There are mornings
When one word answers
Are all I can muster-
Yeah
Okay
Fine
Bye… but I really dont mean
Bye, more like an
“I’m sorry it feels like the weight of the world is heavy upon my shoulders”;
It feels that way, and I want to unburden and say something nice, but I cant”.

I lied.
Depression didn’t knock on my door,
It opened it,
As it always did,
Without an express invitation.
Depression is not a guest,
It’s family,
Moving in at whims
Doesn’t take no for an answer,
Does as it pleases.

When the sun graces
The sky- with its presence
And I try to will myself
With coffee…
There depression is.
Standing, walking
Sitting, beside me.
Sipping from the same cup
As I,
Me…
Us.

Depression didn’t knock on my door,
It waltzed in.
But there are days,
When I can battle it enough,
Just enough- to go through
The day without crashing,
Enough to smile at strangers
Without faking,
Enough to go to work,
Without crying…
Somedays,
I can almost defeat it.
Almost.

This poem is in response to a previouse poem I had written a year ago: A conversation with depression. I had always wanted to write a part 2, and after taking this impromptu hiatu, I thought this would be the best start for me. I missed blogging and the entire community ❤️❤️❤️

Throughout life,
You will come across people,
who would tell you,
“No, You cant.”
You look them in the eye
(stand on your toes if you must)
and declare:
“Yes. Yes I can“.
Don’t just leave it at that,
You may add a little spice with-
“watch me“.

Just let them know you are and… do it.

The sun sprayed gloriously upon my skin, the mockingbirds sang the tune of my soul, natures forces whispered to me and I felt renewed, rejuvenated…. That, is not how it happened. I wish I could say that was it, but it wasn’t it.

It took a tragedy to pull me out of my darkness. A tragedy so great, I expected it to plunge me further into darkness’ clutches. I didn’t just wake up and decide to take hold of life; I woke up, and Life happened to me… That woke me up!

The sun did shine gloriously that morning, the hummingbirds sang, and nature’s forces were aligned in their greatest- but one person didn’t.

How it started, I can’t even remember. And before we could figure out our lives, the drugs had taken control of us. But that’s the thing about addiction, you don’t realise it is a problem until It has it’s cold arms, wrapped tightly around you in an unrelenting grip.

She didn’t wake up. I watched her lying there, with too many tubes, looking the most peaceful I’ve ever seen her, the doctor’s words amplified in my head; not a single visitor, not another friend present… I knew, unless I changed something, sooner rather than later, It would be me lying there.

I wish I could say, I simply woke up and decided to change my life. It took a tragedy, to pull me out of my darkness.

A few weeks ago, I had the pleasure of reading the words of a fellow blogger, Kailee Venzin. It struck a chord with me. And today, I have the pleasure of sharing it with all of you, for my writer’s poem Wednesday.

Yes, I know, I should have posted a contemporary poem but this really, is a great one. I hope you enjoy. Do check out her blog for more poems at: https://innervoicewriting.wordpress.com/

I have seen the world gone mad by Kailee Venzin

I have seen the world gone mad,
seen women bolstered by deep aches
and sly “handshakes”, burning
flags and setting the world on fire.

But I feel lost,
swallowed by a fever.
I drift as if someone took a bite out of me
and spit me out into the world.
I want to stop living in fear of losing another part of myself.

I want to be a lighthouse in the city,
call all my sisters home.
I want to pull the lost ones in,
be the blanket around their trembling bodies.
I want to feel the rebound of heat
of my breath on their necks, whisper-
It’s okay to be broken.
We’re beautiful broken.

I want to be a pussy willow,
that furry young catkin
whispering on her skin.
Soothe her like
that softness did for me as a child.
I want to shout-
You don’t have to wear hard soled shoes
to walk over the rocks.
You can wait til your feet have calloused.
You can wait til your shoulders are strong enough
to hold your body upside down.
I want to take every broken child,
their butter skin between my sidewalk hands
and say-
Don’t you dare lose that
wild wonder in your eyes.
Don’t you dare forget
that strength in your pelvis,
the fervor that carried you home.
You can be broken,
Oh, so broken,
And still be strong.

Nothing prepares you for that knock on the door, that one thing which throws your world into a whirl storm.

There is no set manual which details- preparation for loss.
But, it doesn’t come as a shock either.

You’ve felt flutterings in your heart all morning, not the pleasant kind.
Your hand trembles as you lift the coffee cup to your lips.

You feel some type of way but you don’t know why…
soon enough- you do.

There’s a banging on the door. A body is framed in the doorway.
Your heart skips a beat, lips quiver,
no word is said but a silent motherly message passes across- from her to you.

She barges into the house, turns on the TV set. Her legs give way.
She collapses onto the couch.

You crash beside her, hands intertwined in each other’s. Holding onto the only thing you’ve got- hope.

Nothing prepares you for that knock on the door. When your world as you know it- is thrown into a storm.

Today’s Mental Health story follows Lisa, who used to work as a therapist in prison, and her personal struggles with suicidal thoughts.

Firstly, I’ll say I haven’t had any intense suicidal thoughts the last few days. I’m trying to focus on- this is the Universe letting me know I’m supposed to go down a different path now. I’m telling you (my friends and family…and you too reader) who read this, so you don’t have to worry about me. But man, the day I was fired and the day after, I was thinking of suicide. I was thinking “I’m tired of this shit…” and I sobbed and sobbed. And I thought of how I would do it, and I thought of my furry babies and who could take care of them. And I would sob some more.

I REALLY would like a place of employment where I don’t have to worry about losing my job. The more I think about this past firing, they had NO reason to fire me. It all had to do with a personality conflict with my boss which sucks. I miss that job SO much.

After the first couple of days of suicidal thoughts, they disappeared. I spent the rest of last week depressed and not eating much (which is SO unlike me…I love to eat…I eat 3 meals every day). This week, I’m basically back to normal…I’m focusing on a test I need to pass.

Honestly, this is not the first time I have had suicidal thoughts. This is the first time I’m writing about it though. I don’t think it’s written about enough. More people need to know they are not alone in their darkness. That it’s scary when it’s dark. And I understand why people have thoughts of wanting to give up.

END_OF_DOCUMENT_TOKEN_TO_BE_REPLACED

The sun spreads it golden rays,
Illuminating everything,
In its path-
Except for me.
You see,
Mornings offer no solace,
Just as nighttime offers no rest.

But I rise,
And I dress,
And I greet the neighbour,
And I down a cup of coffee:
With just enough vigour
To say to the world-
I am okay.
But I’m not.

The sun spreads it golden rays,
Illuminating all,
And I’ll like believe-
One day,
I’d feel it’s light in my bones
Too..