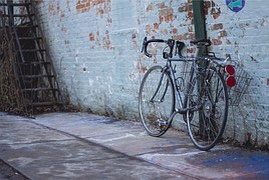 It’s the same everyday. Uncle Jim would walk out the door with his 1960’s suitcase and old man cap. Lock the door and turn the knob twice, look around to make sure the road is clear, then turn the knob a third time. I always wondered why he did that, grandma says, “that’s just his way of doing things”.

He’d walk across the street, say hello to grandma, hand me a sweet and ruffle my hair with the biggest smile on his face while I pretend to drown myself In a book. He’d return to his side of the street, wipe the bicycle seat three times, seat on it and head to wherever he goes off to every morning.

Uncle Jim was a man of repetition and that baffled me. He’d always do the same things a specific number of times and I asked Grandma why, as usual, she said “that’s just his way of doing things”. I’ve resolved to accept Grandma’s answer until I can come up with a better one myself through mere observation.

Word count: 175. This story is in response to Flash Fiction For Aspiring Writers photo prompt challenge. Each week, we are given a photo prompt and we’re to write a 150 (+/- 25) word story surrounding the picture. This week’s image is courtesy of Pixabay.

My story? Do you want short or long version? Oh who am I kidding, there is no short version with me. So, first of all, let me introduce myself. My name is Dawn, I come from one very small European country and I’m 24 y/o. Right now I’m sitting at home, smoking a cigarette, sipping coffee and listening to one awesome song on one hour loop. All good, all normal. I’m in my parents living room and you woudn’t find anything unusual here until your eye would catch one particular stack – stack of my pills. In the beginning, I would hide my pills far away, not that others can’t see them, but so that I can pretend they don’t exist. Let me get clear here, I’m not parading my pills infront of guest, but they became something that I have to take in specific time and it’s easier to remember to take them if you can SEE them.

My problems started around the age of 17 when I was in my first relationship. It was intense, nothing I experienced before or after. Yes, I’m married now and I love my husband, but that first love was something different- Unhealthy. He was like sugar to a diabetic, at the same time so usual, normal, sweet but also deadly. In the beginning, everything was awesome. We were spending every second together, but as time passed by, he was getting more distanced and colder. He would blow me off to go play games and that was a trigger which opened pandoras box inside of me.

I had strong, obsessive, unwanted thoughts. Voice in my head was saying, “leave him, break up with him“ and I was fighting it as much as I could. One day, I was screaming outside of a coffee place because the anxiety was so strong, I felt suffocated. I decided to take a break from him, from us, in hope that those thoughts would stop and everything would go back to normal. It didn’t. We got back together, then broke up again. Got back together, broke up. In-between those ,”together“ parts, he was cheating on me. It made me feel sick but it never crossed my mind that he is not worth it, that “we“ as a couple, were not worth it. There was nothing for us to talk about and nothing to do except have sex and talk about games. That “on and off“ period got really long, it lasted for 6 months I think, and it really killed my confidence in love, life and myself.

Anxiety was pretty hard, school bothered me more than usual and I changed overnight. From the innocent little girl, I became a booty-call for someone who doesn’t even know what loving anyone but himself means. I got so dependent, my day would consist of waiting for him to call me and crying because he didn’t. I even had some crazy ideas like “if I don’t smoke for next hour, and don’t touch my phone for a 30 minutes after that he will call“. I was a train-wreck, but since I told no one what I was doing and what I was thinking, there was no one to tell me to get some help, no one to guide me. So, I contacted “doctor google“.

The thoughts were getting pretty rough, violent. After some time, I did tell my mom what was going on, but she never took is as serious as it was and it kind of just stopped on it’s own. I don’t blame her for not reacting because she didn’t know much about anxiety or OCD so she thought that I was simply being a teen. Weird teen, but normal at the same time. END_OF_DOCUMENT_TOKEN_TO_BE_REPLACED