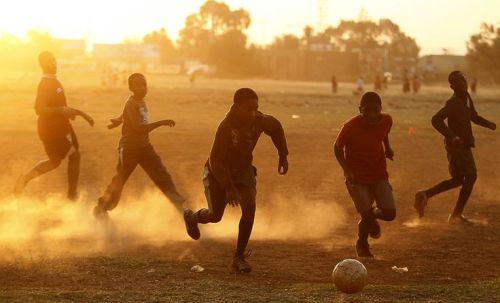 For a while, her ear drums were selectively deaf to the sound of motor tires grazing the gravel roads and the incessant honking by impatient drivers. She watched at a depressing angle, focusing her gaze on the crowd of teenagers playing away their worries. Their worn leather ball being tackled swiftly across the field and red soil swirling above their ankles with each pass.

Their black and coffee colored skins glistened with sweat under the summer sun. She grinned to herself as a bunch of them tried to wipe the salty water streaming down their foreheads while at the same time keeping the ball in check- an act they failed at.

A Black-headed Gull flew past her 3rd floor window, distracting the view in front of her. How easy it was to get carried away by hopeless wishing. She gazed around at the emptiness of her home and said a silent prayer on the kids who unknowingly put a smile on her widowed face every evening.
It was time to shut herself once again to the rest of the world.

“Ameena Garba, come here”, the teacher called me. I left my two friends M and K at the back of the class where I was seating and went to meet the teacher. She was an older woman who wore round glasses and whose son was also in the same class with me. The teacher was sitting at her desk with my notebook in front of Her and a chubby long cane lying on her desk. She knew it was my birthday, oh she knew it was my birthday but it didn’t stop her. The next thing I knew, my palms were outstretched in front of me and three strokes of cane were slapped onto it.

As a kid, I was notorious for noise making which in my defense is basically making conversation with words that when spoken sound too loud for a classroom. I was a talkative, I was restless and I was a whole lot of other things which for the sake of my now adult dignity I wouldn’t repeat. And so, If the teacher would have flogged me for any of that, it would have been a bit justified. Heck, if she would have flogged me for failing my maths class work, and that was a low probability because I was good at it, it would have still been justified.

But no, after flogging me, I was handed back my book and told it was because my handwriting was bad. I received three strokes of cane, on my eight birthday, in front of the whole class because I had bad handwriting. I went back to my seat with tears in my eyes and sought the comfort of my two Bffs. I received comfort and sorry looks from the other classmates as well, even though I think it’s because they wanted me to share my birthday goodies with them.

A few minutes passed, and I was called up once again by the same teacher who flogged me to take a share of the birthday goodies to the headmistress of the school. I clearly remember the teacher telling me that if the head mistress asks me why I was crying, I should tell her it was because I had bad handwriting hence I was flogged. Which now, If I was a headmistress would find it absurd. But that was the way it was back then.

That day I learnt a few things:
1) It doesn’t matter if bad handwriting is genetically inherited, some teachers would still blame you for it (that wasn’t the last time) and you might even get flogged for it;
2) Even If a Nigerian teacher flogs you black and white, they will still eat your birthday goodies without any shame.
3) Birthdays are meant to be awesome, but they are not in my case and that was only the beginning.

And that’s the story of my Life. Also, no hard feelings towards the teacher, I actually find it funny now when I think about it. 🙂 🙂