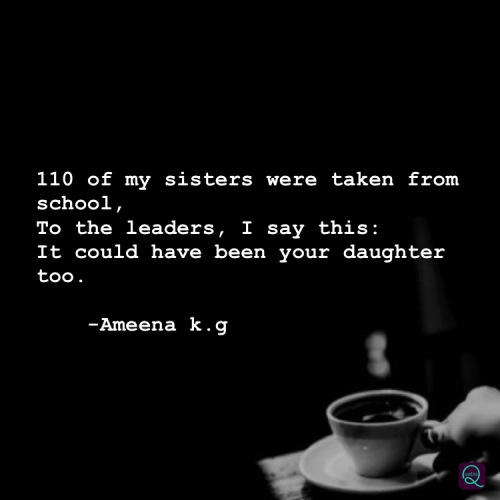 110 of my sisters were taken today.
No yesterday… no,
It’s been a week now.
I’m losing my mind?
Just like the government who claimed:
No, they weren’t taken.
No, they’ve been rescued.
Ohh we’re sorry.. yes they’ve been taken.

110 families,
Under the watch of their leaders,
Awakened to the news their daughters,
Have been taken from their schools.
And the leaders stay sheltered,
In their villas and mansions.
110 of my sisters are gone,
And their leaders are radio silent.

The mothers at weeping,
The fathers are grieving,
My sisters have been taken by men,
Known to show no mercy.

110 of my sisters were taken from school,
To the leaders, I say this:
It could have been your daughters too.

MINI RANT: 110 girls were kidnapped the past week from their school. All that these girls and their families wanted, was an education, and now they’ve been taken. At first, the authorities denied that the girls had been taken before eventually admitting it.

A few years back, over 200 girls were kidnapped from their schools and we are yet to rescue over a 100 of them. This doesnt give us much solace regarding the girls taken now. There’s a saying: Fool me once, shame on you, fool me twice, shame on me. It is a shame that we, as a country allowed this to happen again. All these girls (Dapchi Girls) wanted was an education, I pray we get them back safe and sound….. Its been 9days!!!!