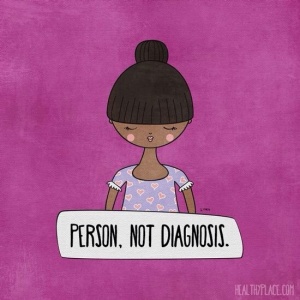 When the psychiatrist first told me I had paranoid schizophrenia, she started it off with, “I have some bad news.” I have heard my diagnosis described as, “Every parent’s worst nightmare” and many other almost fatalistic phrases.

How are you supposed to feel about yourself when people describe something that is so much a part of you as awful, terrible, tragic, or sad? Living with paranoid schizophrenia is not for the weak, but it isn’t the worst thing in the world either. Those of us with a mental illness know that suicide is the worst thing, because in the case of suicide everyone loses and the illness is the victor. Suicide should be every parent’s worst nightmare, not schizophrenia.

Unlike suicide, there is hope with schizophrenia. I have symptoms every day, but I live a good life. I worked most of my adult life as a social worker, a library assistant, and a marketing director. I am happily married to the love of my life, and I am currently enrolled in a certificate program for writing at UCLA. I am an aunt to some wonderful young women and men. I am a sister to all five of my brothers. I am an only daughter to my parents, and I am a niece, cousin, and friend to many people. Does that sound like “a parent’s worst nightmare?” No, it doesn’t and it isn’t.

Having schizophrenia doesn’t look the same for everyone though. I managed to get through college before having my first psychotic episode. Many people have early onset schizophrenia which can have more severe or frequent symptoms. I only hear voices when I am actively psychotic, but there are people who have schizophrenia that have to maneuver life while constantly hearing voices. The two symptoms I battle most frequently are paranoia and anxiety. Many symptoms are getting less frequent as I age, but anxiety and social isolationism are getting far worse.

All during that time I have managed to love, laugh and live. In fact, I rarely go a day without laughter. Laughter is an essential and huge part of my life. I have a big laugh that fills the whole room, so when something is really funny to me, many people join in and laugh with me. I am frequently told that my laugh is contagious.

There is so much misinformation, fear and misunderstanding around schizophrenia. Many of the people who suffer from it live in the closet because of stereotypes, discrimination and stigma. I have only been public about my diagnosis for just over a year, because prior to that it caused me too much shame. Now that I live out in the open, I plan to look as many people in the eye as possible, and say, “I have schizophrenia.” Just meeting me can smash all the stereotypes, and that is empowering and beneficial.

I wish I could meet you, so you could see there is so much worse that can happen in life than being diagnosed with schizophrenia. It can be bad, but it’s definitely not the worst.

Today’s guest post is by Rebecca who blogs at a journey with you where she writes about surviving schizophrenia. Rebecca is a writer, a mental health advocate and recently released a book “pills, poetry and prose: life with schizophrenia” which is available on amazon.

For more information on Schizophrenia, Here is a link.

If you’d love to contribute and share your story on Mental health Friday, I’d love to have you. You can contact me on My email address is: mykahani@yahoo.com. Image credit: HealthyPlace.com