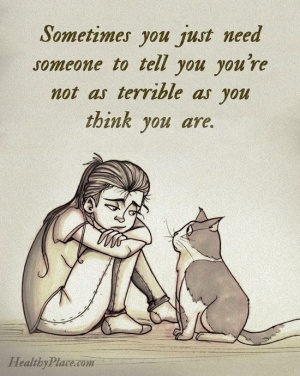 Today’s MHF is a continuation of Trae’s journey with Bipolar disorder. Up until now, we’ve seen her deal with her mother passing away, the negative effects of anti-psychotics and her relapse with addiction. We ended last time with Trae getting back her life, following her entry into an Alcoholics Anonymous group.

I left off in my story at a time when we had just moved into an apartment in a new town. I had started to go to A.A. meetings and met my new sponsor. At the same time, as soon as we moved into that apartment I started to talk to my ex-husband about my leaving. We had gone for coffee every week or so to talk outside of the house and we argued a lot over this. I told him my reasons for leaving many times over and I also told him I didn’t believe things would change. I told him I believed the only reason he was being so nice to me was because he had nothing and no one else at that moment, but as soon as he picked himself up again, which he would, he would forget I existed the way he always did. My ex-husband did put in effort, but as I told him, I did not believe things would really change.

At the same time, I was going to meetings and on commitments with my sponsor. I met the other active members of the group, one of which was John. I did not know him very well, but when he spoke at commitments and meetings, I listened. My respect and admiration for him grew.

During the winter of 2011-2012, I spent my spare time working very intensely on my fourth step. (Step Four, Made a searching and fearless moral inventory of ourselves.) I do believe what that did for me was far beyond it’s intended purpose of helping me to see what my characters defects are, why I do the things I do and how to change them. It also helped me to see that I was not so bad as I was made out to be. I listed everything I had done wrong to hurt another person in my life and what I saw was that I was not such a bad person, as a matter of fact I was a pretty good person. The fact that I have bi-polar disorder, ADHD and PTSD had nothing to do with what kind of person I was. This of course caused me to look harder at the people that had treated me as though I were some kind of problem. Clearly, I was not their problem. Clearly, I did not deserve to be hurt anymore.

It was in the spring that I did my fifth step, outside on a cool day with my sponsor. (Step Five. Admitted to God, to ourselves, and to another human being the exact nature of our wrongs.) We sat together and went over everything. She then brought me to her house and left me to sit alone and do steps Six and Seven. (Step Six, Were entirely ready to have God remove all these defects of character.” Step Seven, Humbly asked him to remove our shortcomings.

During this time I had become friends with some of the members of my group on face book. John was one of them. It was in June that I sent a message to John asking him if he would have coffee with me. He said yes.

On June 13th 2012, John and I went out for coffee as friends. I talked for ten hours and the man listened. We drank coffee, had pizza, had more coffee and the entire time I tell this man my whole life story. I can’t explain why, I don’t know why.

That evening at 6:30pm, I left John and called my husband to let him know I was on my way home. I told him where I was and he started to scream at me in a way I had never heard before. He was frightening me and I told him that. I said if he didn’t stop screaming at me I wasn’t going to come home. He then told me that if I did not come home, he would find John at a meeting, sneak up on him and beat him with a base ball bat. The moment he said those words, I told him, I’m leaving you now.

I called John on the phone and told him that my husband had threatened him. Then I called a friend who lives about an hour away and I went to spend the night at her house. My ex-husband called her home phone to speak to me to make sure I was really there. I told her I wanted to leave my ex, but she told me when I went home in the morning to just sit with my tongue on the roof of my mouth and say nothing. I assume she thought I was saying this out of anger, because I had not expressed my feelings to her before this.

The next morning, I got up and drove home. To be continued…

Guest Writer: Trae from (TripleClicka.com). I’m honored to have Trae participate, help spread mental health awareness and blur out stigma by sharing her story, here on Mental Health Friday. She’d be back in two weeks with a continuation.

If you’d love to contribute and share your story on Mental health Friday, I’ld love to have you. You can contact me on My email address is: mykahani@yahoo.com . For more information, visit this post. Image credit: HealthyPlace.com