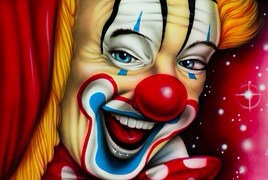 Staring at her reflection in the mirror, after a much needed shower, Allison decided to take a whole new perspective to things.

There was no doubt, someone was trying to break her. The ulterior motive behind it, she had no idea. What she did know was- she wasn’t going to give them that satisfaction, if she’s going down, she was going down fighting. “Though I don’t plan on going down”, Allison thought aloud.

Number one on her list of suspect was the coward David, her ex-husband, though Richard Blake wasn’t far behind. She knew far too much than to trust her father, “with Richard, you just never know”, she recalled an old conversation with her mother.

A door creak brought Allison back to reality. Startled, she grabbed the nearest vase and tiptoed towards the door. At that moment, a clownish face poked through which made her jump and the vase in her hand fell to the ground.
“Hey, it’s only me”…
“Darnit Richard! I was aiming for your head”, Allison retorted.

Word count: 173. I stayed within range this time and this is my submission to this week’s Flash Fiction For Aspiring Writers photo prompt challenge. Imagine my surprise when I saw a clown as this week’s prompt and had to find a way to fit it into blackouts :D.