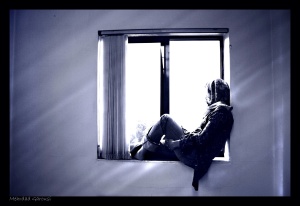 For a longtime she was scared of being alone. There was something about the silence that was paralyzing. The voices got stronger and the words, louder with the silence around. She fit herself into any group of people she could find just to avoid the silence or lack thereof that came with being alone. And that was one side of the coin.

On the other hand, a part of her was yearning to be secluded. It felt encroached in public despite the empty spaces between her and most people. It didn’t matter, even 10 feet away was too close. That part of her needed to be alone, away from multi-cellular organisms, and it did always win.

And there she would be, in a semi-sitting position, knees shaking, head throbbing; the voices gaining force. Having a meaningless conversation in her head of which all she could make out were mumbles. She was crazy, had to be. On the edge of her single bunker bed, hands in her hair trying to shut the voices, she claws deeper into her skull. It didn’t help, because just as the the whirlwind of emotion began, the waterworks began as well.