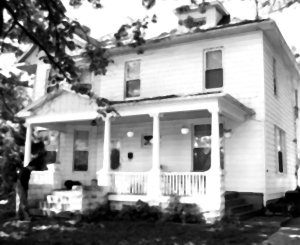 I was only 12, what did I know then. All giggles and excited as we moved into our new home. It was a duplex and only a few blocks away from our former house. But- This house was bigger, way bigger. We had 4 bedrooms, each with a bathroom. An extra guest bathroom for visitors was situated at the ground floor; A massive kitchen which brought pleasure to my mum and two extra rooms in the ‘boys quarters’ which is an extension of the house at the backyard.

It was all very fine, fun and homey until we had to share the house. My dad was getting a second wife and we had to pack our things and move to the ground floor. It wasn’t funny. I loved my room which was beside my mum’s. It was bigger, and it was upstairs where all the other rooms were. I couldn’t understand it.

And then, slowly and gradually our home became a mere house. Built of four walls and filled with drama- my raging teenage hormones didn’t help. Family dinner at the dining table stopped; watching TV with my dad stopped- my step mum isn’t exactly pleasant company. Most nights were spent in my mum’s room, that became our solitude- my siblings and I.

Next came the lies; I had to make up stories to explain why there were two women living in our house. Polygamy isn’t really common where I live. I went with, ‘the woman’ was my mother’s sister, which they believed. To date, some of my high school friends still don’t know she was my step mum.

Those four walls hold stories, memories that some might find unbelievable; but they were real and they happened. That house broke me, but it also made me. It was there I learned to appreciate , love and cherish my mother.

And that’s one thing i learned in the house: houses may change, rooms may change, but my mother’s love and support, it will always remain.

7 thoughts on “The House That Made Me”